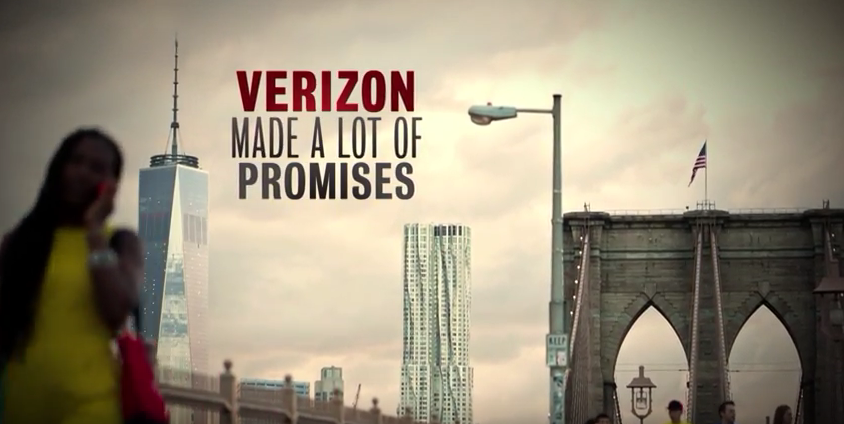 Union Slams Verizon For Not Delivering High Speed Internet
by Erin Durkin, Daily News Oct 13, 2015
A union is launching TV ads Tuesday that slam Verizon for failing to deliver high-speed Internet to neighborhoods across the city as promised.
The Communication Workers of America is sponsoring the ad campaign, charging that Verizon broke its 2008 franchise agreement with the city to provide its FiOS high-speed fiber optic Internet and television service to every home in the city that wants it.
"Verizon made a lot of promises to New Yorkers, but did it keep them?" the ad says. "In Bed-Stuy, the Bronx, and neighborhoods in between, New Yorkers have been asking for FiOS, the high-speed Internet and TV service Verizon promised, and getting the runaround ... New Yorkers just can't trust Verizon."
The ads echo the conclusions of an audit by the de Blasio administration that found the company failed to uphold its 2008 deal, which said the service would be available everywhere by the end of 2014.
Instead, tens of thousands of service requests have gone unfulfilled.
The city says low-income and outer borough neighborhoods have been particularly neglected.
Verizon maintains it has upheld the deal, installing fiber lines throughout the five boroughs, but that the service is unavailable at many buildings because landlords balk at giving them access.
"We are very concerned that Verizon has failed to meet its obligations," said CWA assistant to the president Bob Master, adding they'd spend six figures on the 30-second ads.
"We want our company to comply with the law, and of course jobs are dependent on the company fulfilling their obligation to provide good service," he said.
CWA is locked in an ongoing contract dispute with Verizon.
"The CWA needs to get its story straight. The fact is that Verizon continues to expand FiOS cable television services in New York City and wins new customers every day. As of today, it's available to more than 2 million NYC households and that number is increasing daily," said Verizon spokesman Rich Young. "Despite their misguided statements, the truth is that Verizon has deployed fiber in every city neighborhood."
Found In:
News