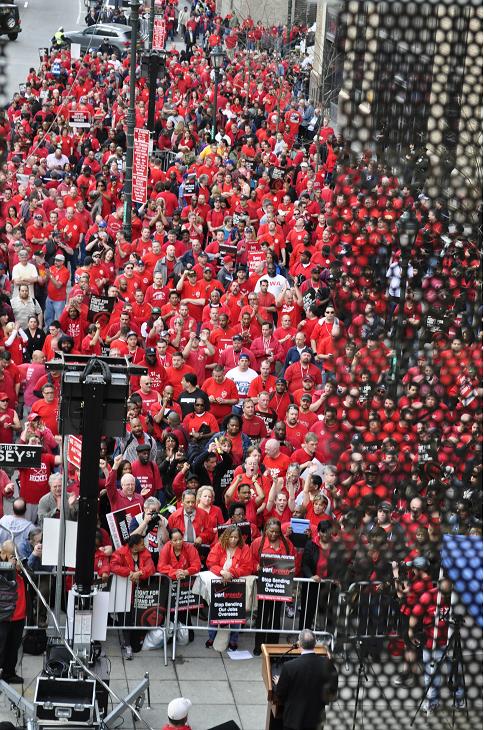 CWA District 1/IBEW Local 2213 and IBEW New England Regional Committees returned to the bargaining table on Monday April 16, 2012 at the Rye Town Hilton in Rye, NY. All of the retrogressive demands that the Company had proposed in August still remain on their agenda.

Wages -.the Company has offered 0% wages for each year. You read that right- the company has no money on the table for wage increases for their employees. The company did make a proposal that would give 0% increase for 2012, 1% for 2013, and 1% for 2014 but that was pulled off the table on March 31st because the Union did not accept their package which contained retrogressive demands which included:

Health Care Cuts – The Company is not only trying to implement premiums to our plans but they are trying to destroy the health plans that we now have as a benefit. They want to raise deductibles, increase co-insurance, increase out of pocket expenses and add premiums. If a family of four (4) had some doctor bills ($1,000), hospital bills, surgery, anesthesia and in-hospital physician’s bills - $10,000 and also had one emergency room visit ($750), they could have bills that would add up to $11,750. Under our present plan, there is $0 premium, there would be $0 deductible because we have 100% coverage and the out of pocket expense would not kick in because we would not have reached the limit. Under our present plan that family of four (4) would pay a co-pay of $15 for the 5 regular doctor visits and for the 5 preventive care visits there would be no charge. There would be a $15 co-pay for the emergency room visit. The total for the year would be $90.

This fight is more than just paying a premium.

As you can see by the example, your premium would be $1630 but your actual medical cost would be $4995 compared to what you pay now which would be $90

The most recent offer also included:

Eliminate Pensions:
Cut pension accruals in half. For anyone currently on the payroll your pension will be capped at 30 years. Beginning October 1, 2012, your pension plan will only accrue at 50 %.
Eliminate the Pension Lump Sum option. Modify the 401(k) Plan and the CPS. Eliminate the Sickness Death Benefit.

ABSENCE – The Company only wants to give 5 day’s paid per year and still discipline members who use those 5 days.

CALL SHARING – Verizon still demands their call sharing proposal but have not entertained any of the security provisions from the Union nor have they given us any additional jobs.

Eliminate the Next Step Program

So, we did not accept that proposal and the company withdrew their wage proposal. As we have said before, we are in the fight of our lives with Verizon. The Chairman and CEO, Lowell McAdam tripled his compensation from 7.2 million to 23.1 million annually yet he does not want to give his employees a raise. This is a slap in the face to every member. We need to send a clear message that we are determined if there is no place in this business for us, then we will make certain there will be no business without us either.

Verizon’s CEO Lowell McAdam seems hell-bent on destroying the middle class jobs CWA and IBEW have fought so hard to create over the last 50 years of collective bargaining.

Verizon’s Annual Shareholders Meeting is Thursday May 3, 2012 at 10:30 AM at the Von Braun Center, 700 Monroe Street, Huntsville, Alabama. We are still collecting your proxies. We are asking all of our members to vote your proxy, sign and date your card and return it to your Local. The Shareholder’s Meeting is a Thursday and there will be a “sea of red” CWA and IBEW members who are also shareholders who will deliver these proxies and our message to that meeting.

It is more important than ever that our members continue to mobilize and that EVERY member commit to spending at least 4 hours per week participating in mobilization activities.

If you have not gotten involved, it is time to look at how much you can lose. It is time to call your Local or talk to your steward and find out what you can do to help